There are growing concerns among U.S. homebuyers about the overall health of the housing market – and for good reason.

Over the past two months, the market has definitely begun to slow down. Increasing homeownership costs are shrinking the pool of potential homebuyers and forcing some sellers to lower their prices. Nearly one in five home sellers dropped their asking price during the four-week period ending May 22 — the highest rate since 2019, according to a Redfin study. New homes sales in April also fell to their lowest level in two tears.

Is the housing market in a bubble heading toward a crashing pop? Or are we looking at a more modest correction? Here’s everything you need to know.

Additionally, a wave of millennials reached peak homebuying years. This influx of buyer demand bumped into a lack of available homes to purchase thanks to nearly a decade of underbuilding and sellers who held off on listing their homes due to the health crisis.

This record-high demand and record-low supply obviously aren’t sustainable for the long term. Current data show signs of a return to the market pace seen in the years leading up to the pandemic – not a crash or a correction.

The ShowingTime Showing Index tracks the traffic of home showings according to agents and brokers. It’s a good indication of buyer demand. Here’s a look at that data going back to 2019: 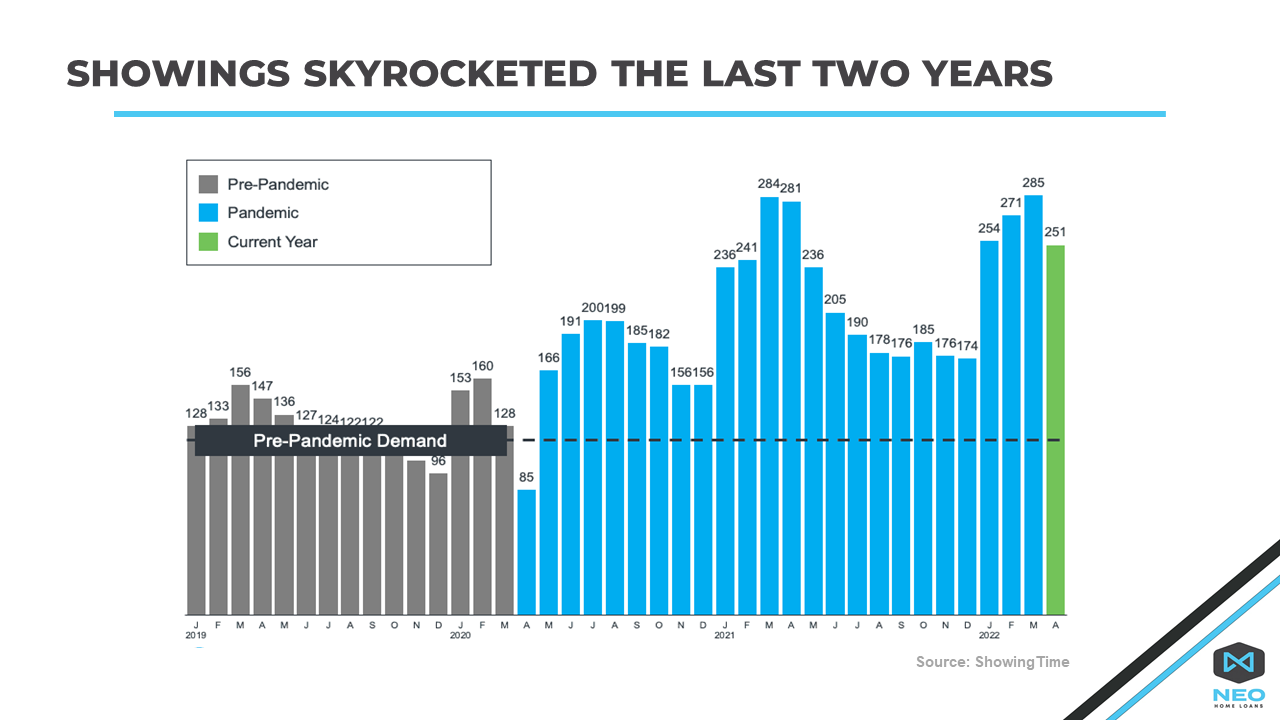 The 2019 numbers, shown in gray, compared to the blue pandemic years underscore the jump in buyer demand.  The green line shows April 2022 showings where buyer demand did moderate slightly but remained well above 2019 levels.

It’s important to know that 2019 was a strong year for the housing market. Even with interest rates increasing and home prices at a peak, buyer demand is still higher than in pre-pandemic years. April represents a turning point, but it’s still clear that the market is simply moving back to pre-pandemic levels – not crashing.

Let’s also get some perspective on the headlines about existing home sales declining, as we mentioned above.

Take a look at existing home sales going back to 2019 using data from the National Association of Realtors: 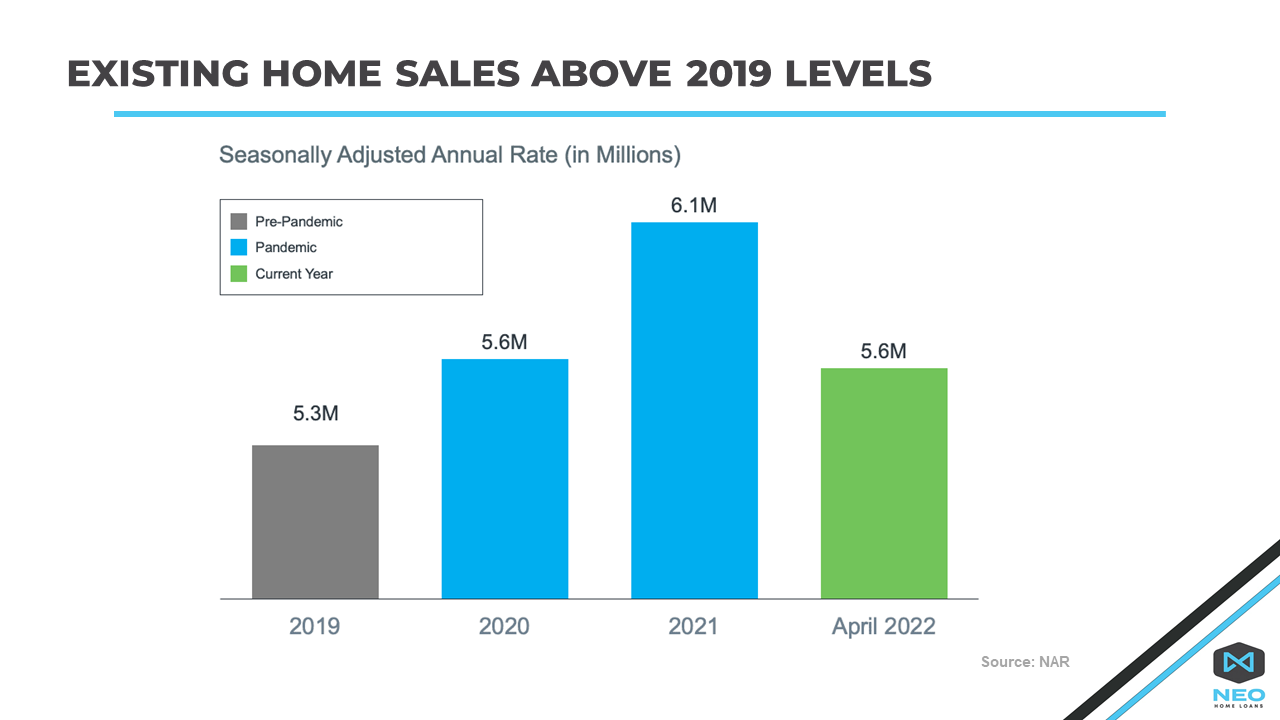 Again, a similar story emerges. The blue pandemic numbers outpace strong 2019 home sales shown in gray. The latest projections for 2022, in green, show a market that is on pace to close this year with more home sales than in 2019.

Simply put, you just can’t compare historical data with the abnormal pandemic numbers.  By comparing today’s market to a recent, more normal year, it’s clear that the housing market remains strong, and any “dip” is simply a return to more normal levels.

Today’s Market Is Nothing Like The Last Housing Crash

In fact, the 2022 housing market is still so hot that many people can’t help but think back to the housing bubble of 15 years ago — and wonder if another catastrophic crash is on the horizon.

The housing bubble that led up to the 2008 crash was caused by a combination of cheap debt and predatory lending practices that resulted in many borrowers being placed into mortgages they could not afford. The situation triggered a foreclosure crisis among homeowners and a credit crisis among the investors who owned bonds backed by defaulted mortgages.

Today’s market is very, VERY different. Here are three of the main reasons why:

There is one obvious reason why home prices won’t crash: the supply of homes dramatically trails the demand.

The inventory of existing homes for sale reached record lows in early 2022. While the squeeze has eased somewhat, the National Association of Realtors reported just a 2.2-month supply of homes for sale in April 2022. That’s way below the six months of supply that economists say signals a balanced market – one that favors neither buyers nor sellers.

During the mortgage boom of 2005 to 2007, anyone could borrow nearly any amount of money, regardless of the size of their down payment or the health of their credit score.

Thankfully, the time of historically loose lending standards was short-lived. The Mortgage Bankers Association’s Mortgage Credit Availability Index soared to a record high during that bubble, then plunged to a fraction of that level during the crash.

Mortgage standards have remained tight to this day. To qualify for a home loan, borrowers need a solid combination of good credit, documented income, and large down payment.

The demographic forces driving housing look different, as well. In 2005, members of Generation X were hitting their prime homebuying years. There was just one problem: Gen X wasn’t very big, certainly not compared with the baby boomers before them.

Much of the demand during the last bubble was driven by boomers buying multiple homes, and by new-money Gen Xers becoming landlords. Today, the millennial generation is primed for household formation, and unlike Gen X they are a much larger group. According to the latest population data from the Pew Research Center, there are 72 million millennials, compared with just 65 million Gen Xers.

The combination of sky-high home prices and soaring mortgage rates have caused homebuyers to finally push back. And as demand goes down, it’s not surprising that questions about the stability of the market start to rise.

However, it’s important to look past the abnormal pandemic market and use a more typical year for perspective. The current market is not heading toward a crash. It’s just a turning point toward more typical, pre-pandemic levels.

House prices are caused by one thing: supply vs. demand. Yes, there are few buyers in an inflation-heavy economy with high interest rates, but in order for home prices to go down there needs to be fewer buyers than sellers – and that is just not within the realm of possibility today.

What does all this mean? Don’t only listen to what you hear in the news! When it comes to your homebuying decisions, it’s important to have a trusted mortgage advisor in your corner – one who can help you cut through the noise and guide you to making smart financial decisions.

We would love to advise you on your homebuying journey. Please reach out and we'll put together a plan to build your wealth through homeownership.